Russia’s hard-ass hooligans and mouthy ministers may cost them their place in the coveted European Cup.

Thirty-five people have been injured – most of them England fans and four seriously.

Russia will be disqualified from Euro 2016 if there is further crowd trouble at their remaining tournament matches.

It doubtful that anybody in Russis really cares, as their soccer team is a running joke in European circles.

In fact, it looks as if the Putin regime actually sent in their goon squads as a show of Russia masculinity. 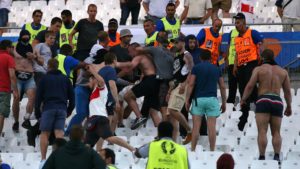 Igor Lebedev, a nationalist Russian lawmaker who sits on the Russian Football Union’s board, seemed to praise those who fought.

“I don’t see anything terrible in fans fighting. In fact, well done our guys,” he wrote on Twitter.

Of course, FIFA being the corrupt, reprehensible cartel that it is, Russia has already been awarded the 2018 World Cup.

The Federal Reserve kicks off its two-day meeting in Washington, DC this morning.

Policy makers were taken aback by May’s pitiful jobs report, and are likely to hold steady on interest rates despite earlier hawkish remarks.

A June rate hike seemed an easy bet at one point, but given recent geopolitical headwinds the central bank may not tighten again until September.

A possible British exit from the EU, the ascendance of wild card Donald Trump and stubbornly low U.S. inflation could even keep the Fed from hiking rates for the rest of the year.

Trump called the newspaper “phony and dishonest,” saying Monday he had revoked their press credentials from his campaign events.

The Post happens to be one of the nation’s largest, most influential newspapers.

“The Post will continue to cover Donald Trump as it has all along– honorably, honestly, accurately, energetically and unflinchingly,” Executive Editor Marty Baron said in response. “We’re proud of our coverage.”

It remains to be seen whether Wall Street will get skittish about the possibility of an authoritarian regime in the White House.